April 25 in Australia and New Zealand is ANZAC Day. It’s the day we pay respect to the soldiers who have served our country in battle and to honour those who made the ultimate sacrifice. On this day, there are traditions that Australians practice year after year. Some of them are solemn, and some of them are more light-hearted. We practice all of them with the greatest of respect and admiration for those that fought. So, what are the traditions of ANZAC Day in Sydney? We’ve put together a list of seven ANZAC Day Sydney traditions that everyone should take part in at least once: Many RSL Clubs in Sydney hold dawn services on ANZAC Day. The main, and by far the biggest dawn service is held in Martin Place at The Cenotaph (which was sculpted by Sir Bertram Mackennal and unveiled in 1929). The Cenotaph service begins at 4.15am and attracts hundreds of people, who get up early and come to pay their respects. There is no more sacred place in Australia’s war-time history than Gallipoli in Turkey. Every year, hundreds of Aussies converge on the beach for a special dawn service on ANZAC Day. For us back in Sydney, we content ourselves with watching it on television. The ANZACs fought for our freedom and to protect the Aussie way of life and a big part of that is enjoying a cold schooner of beer (responsibly) with your mates in their honour. 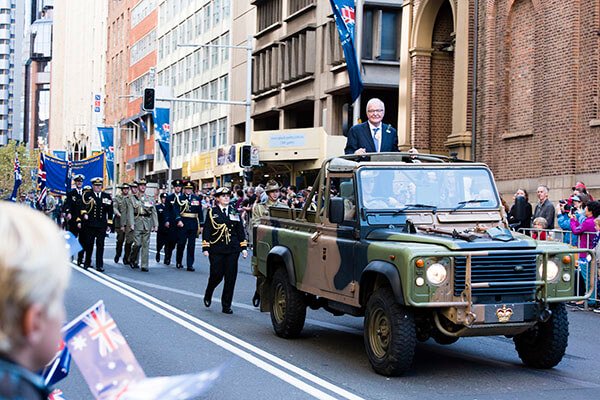 Sydney’s ANZAC Day March is where we give those who served in the defence of Australia the praise they deserve. The march begins at 9am at the intersection of Martin Place and Elizabeth Street. It travels down Elizabeth Street and finishes at the end of Hyde Park at Liverpool Street. The procession starts with WWII veterans, followed by Navy/Army/Air Force in order of the date of their conflict. It then features civilians in support of Australian troops, descendants of Australian veterans, and Commonwealth and allied soldiers. After the parade, a commemoration service is held next to The Pool of Remembrance at the ANZAC War Memorial in Hyde Park South. For well over a decade this match has become one of the best of the NRL’s regular season matches. It’s a day filled with emotions as these two traditional rivals fight it out. Naturally this occurs after standing for the last post and the national anthem. The match, which is usually played at the Sydney Football Stadium, is always a sell out and a Sydney ANZAC Day tradition. Watch the action live or on TV at the local RSL. The ANZAC Biscuit is so traditional and sacred that it’s illegal to call the biscuit by the name without sticking to the exact recipe. You can find the recipe and a history of ANZAC Biscuits here. This is a bucket list experience for every Aussie, and the only day that it’s legal to play is on ANZAC Day. How does Two-up work? Well, one person stands in a ring and flips three coins (traditionally it was two, hence the name) and you agree to a bet on heads or tails. Diggers played the game in the trenches to pass the time in Gallipoli. The reason that it’s only legal to play on ANZAC Day is because, strictly speaking, it’s unlicensed gambling. Perhaps this is what makes it so much more fun.

Whatever you spend your day doing, ANZAC Day is a day of reflection for all of us. Lantern Club will be open for business on ANZAC Day, and while we won’t be conducting any services, we will certainly be quietly remembering those who served. As always, we look forward to your company, should you choose to join us for coffee or a meal.